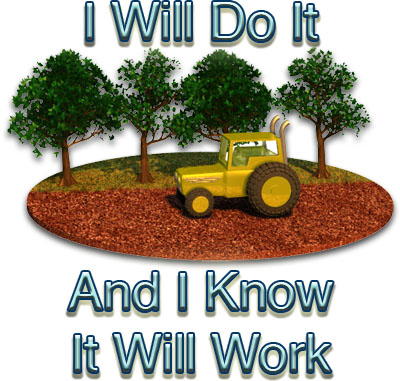 Burt owned a very small farm. He was a hard working man; he had two other people working with him, George and Fred. He had just bought a second hand tractor, which wasn't working very well! He said to George and Fred, to carry on with the farm work, while he tried to fix the tractor!

This time the tractor just wouldn't start,"I will do it, and I know it will work", thought Burt with great determination! He first checked if the Fuel system (Gas) was all right, he then went to the electrical side of things, and found that the leads to the spark plugs looked very poor! There he thought is my problem!

So Burt got into his car, and drove down to the garage near the farm that sold car parts, and bought a set of new leads, and while he was there some new spark plugs. When he got back, he set about re-wiring the tractor, and fitting the new plugs.

Then all was done; he turned the ignition on.Chug. Chug.and then it started, Burt was so pleased! He knew he could do it. Burt believed he could repair his tractor, and he thought, "I WILL DO IT, AND I KNOW IT WILL WORK!".

This reminds us what it says in Gods Word, "So also faith, if it does not have works (deeds and actions of obedience to back it up), by itself is destitute of power (inoperative, dead)."James 2:17 (AMP). ".Faith, if it hath not works, (corresponding actions) is dead, being alone." James 2:17 (KJV).